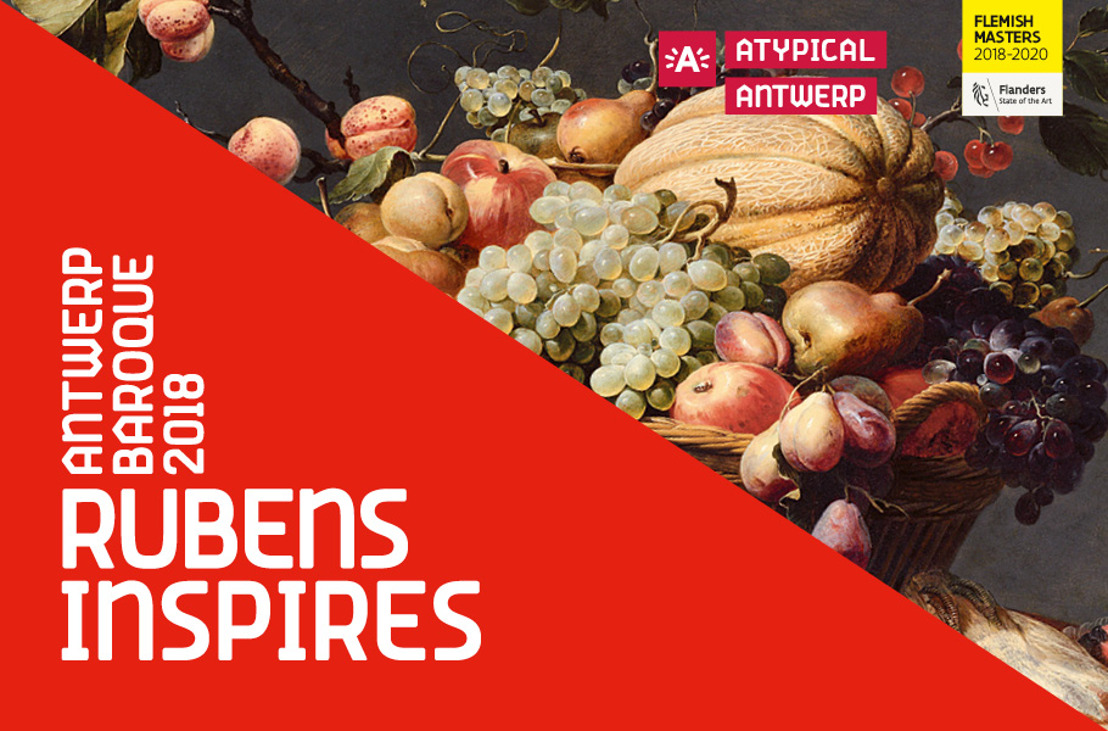 How did the book evolve during the Baroque period? Why did a publisher such as Balthasar Moretus collaborate with prominent artists? And what vision do contemporary innovators in the book sector contribute? The exhibition in the Plantin-Moretus Museum shows the publisher's love for the profession. How he motivates the artist, printer and designer in the past and present to create an outstanding product.

With a lecture series, workshops, collection and studio visits, the museum dedicates this passion to the visitors.

The recently restored Snijders&Rockox House will be buzzing during ‘Antwerp Baroque 2018. Rubens inspires’ thanks to a culinary experience. Food photographer, Tony Le Duc, enters into dialogue with seventeenth-century promoters of good taste, fresh market produce from the sea, the river and the hinterland, with Frans Snijders and his contemporaries. He has succeeded in giving Baroque a contemporary interpretation. Tony Le Duc elevates basic food to an art form. A talent with which Baroque painter Frans Snijders was also endowed. Le Duc is inspired by Baroque food still lifes, and takes a contrasting look at Baroque through contemporary photo and video work.

Le Duc does not stop at photo work, he is also in contact with 17 chefs from Antwerp who are developing new recipes using ingredients from an early seventeenth-century cookery book. Keep your eyes peeled for food and indulge yourself!

The Master lives! / Massacre of the Innocents

The Rubens House will be packed during the cultural city festival, ‘Antwerp Baroque 2018. Rubens inspires’ with new loans and hidden secrets. Since the beginning of June, visitors have enjoyed an enriched collection with new masterpieces, while the public have been able to discover Rubens’ secrets thanks to the restoration of the Self Portrait, the garden porch and the garden pavilion.

With the King Baudouin Foundation's long-term loan to the Rubens House of the portrait of the apostle Matthew by the young Anthony Dyck, the Rubens House collection is enriched once again. The work comes from a series of apostles and was created between 1618 and 1620.

This autumn, The Art Gallery of Ontario (AGO) is lending the monumental Massacre of the Innocents in Bethlehem to the Rubens House for a while. So, the most expensive Rubens ever, often considered to be one of the young artist's early masterpieces, returns home after 400 years.

The history of the canvas is nothing short of spectacular. The painting quickly became part of many prestigious collections, but has been wrongly attributed to various artists since the 18th century. In 2001, specialists clearly recognised the hand of the Antwerp master within the Baroque style. The discovery of the lost painting by Rubens was great news, and the work was sold. It was sold for a record £49.5 million at a Sotheby's auction in 2002, which makes the Massacre of the Innocents the most expensive painting from an old master ever. It was bought by Canadian businessman and collector, Ken Thomson, who donated it to the Art Gallery of Ontario in Toronto.

Events in the autumn

This autumn as well, Baroque remains hot in Antwerp. In collaboration with more than 50 partners from the cultural scene, the city of Antwerp is proving Baroque is still an enormous source of inspiration for contemporary art. This not only means renowned exhibitions, but also a promising, varied range of music, theatre, literature, street art, photography, installation art, dance, performances, walks, developed by and in collaboration with the Antwerp arts sector. From artists to collectives, from big names to ambitious amateurs, they are all getting involved with our Baroque heritage. And as a result, Baroque will become a story for everyone: from the culture connoisseur to small children. Museums, churches, libraries, theatre houses, cultural centres and even crèches will be getting involved in Baroque projects.

A complete overview of the programme is available on our website www.antwerpenbarok2018.be and the digital pressroom https://stadantwerpen.prezly.com/baroque-in-the-city#

Massacre of the Innocents

At surprising locations throughout the city

More information for the press on https://stadantwerpen.prezly.com